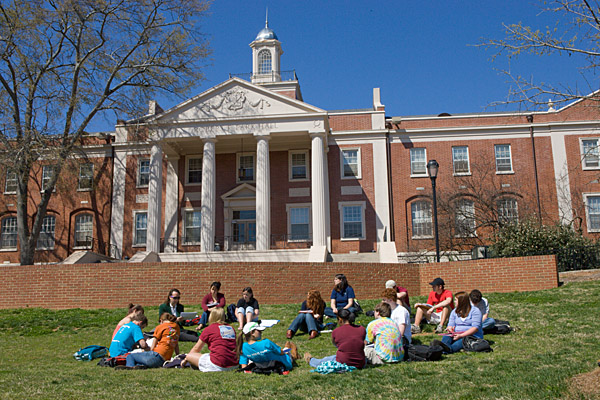 Once again, spring has come — and gone already, having arrived as early as January. By the time commencement ceremonies were underway around campus, the usual cornucopia of blooms was long past. And once again, the English Department commencement marked the passage of another graduating class. Talking to parents of my students afterward was a special treat, and one of them observed that nearly all the students were women. “That’s true,” I replied. Of the fifty-four who participated in the ceremony, there were only five guys (which, coincidentally, is the name of a burger joint downtown across from the Arch of countless photo-ops). In fact, I had recently tallied the gender profile of students in our spring term courses. Of eighty-three classes, only eight had gender parity, while twenty-nine had a ratio of 10 to 1 (female to male). The picture that emerges is even more extreme  when we look at upper division courses, since only majors can take those. Of our forty-eight 4000 level courses this spring, only four had gender parity, while seventeen of them had a ten to one ratio. Basically then, it’s clear that female English majors are the great majority: only one or two of ten is male.

How does this relate to the gender profile of the faculty? Retirements tell the story. This year we bade farewell to Doug Anderson, Simon Gatrell, and Fred Dolezal, who were preceded in retirement last year by Hugh Ruppersburg and Charlie Doyle. In fact, the only woman who has retired in the past eight years was the late Judith Ortiz Cofer. With five men gone in the past two years, gender parity in the faculty is finally a reality. And so it is fitting that the next department Head will be Michelle Ballif, who will succeed me in August.

It’s certainly a good thing that young women, who form the great majority of our majors, see so many accomplished women in the faculty. But gender disparity in English means there’s disparity elsewhere, and this has the potential to replicate old stereotypes in worrisome ways. If the “hard” sciences and the “worldly” schools like Business and Engineering are predominately male, a tacit signal seeps out from the university, suggesting that some fields, like literary studies, have become a kind of “woman’s work.” Such social maladjustments are reflected in the even more worrisome statistics about the profession.

In the Chronicle of Higher Education in February 2017, Kevin Birmingham addressed “‘The Great Shame of Our Profession’: How the Humanities Survive on Exploitation.” The gist of his alarming parade of statistics include the following: (1) tenured faculty now represent only 17% of college instructors, (2) between 1975 and 2011, the number of part-time instructors quadrupled, (3) 35% of part-time instructors live at or below the poverty line, and (4) no less than 61% of part-time instructors are women. These figures are alarming. Fortunately, they are not replicated here at the University of Georgia, but a single institution can’t hold out forever against national trends.

As I’ve indicated in previous columns, these are hard times for the humanities, and we recently saw the President recommend complete defunding of the National Endowment for the Arts and the National Endowment for the Humanities. Fortunately, Congress did not accept his recommendation, but the threat remains. Hard times is one thing; extinction is something else altogether. A classic of American history is Richard Hofstadter’s 1963 book Anti-intellectualism in American Life, with its bracing chronicle of everything you’d imagine from the title. But Hofstadter was sensitive to the fact that the United States, as a democracy, has always needed to audition alternative voices, other perspectives; the intellectuals had no guaranteed stake in the outcome of public issues. But in times like these, we intellectuals occupy an increasingly precarious ground, recently made even more precarious in Georgia by the Governor’s signing into law the “Campus Carry” bill permitting concealed weapons on campus. As Maureen Downey’s “Get Schooled” blog for the Atlanta Constitution-Journal reported earlier in May, an open records request revealed that the tally of calls against the bill in the 2017 legislative session was 14,873, while the number of those in favor was 145. No typo: the discrepancy is that extreme. It gives the phrase “special interests” a whole new profile, doesn’t it? We have legitimate interests as well, but apparently not special enough to count.

I’d like to end on an uplifting note, but public events are shouting louder than a Head’s column can aspire to. The most I can offer is a reflection on what it is we do, which is not correcting grammar and spelling (as so many people I’ve encountered on plane trips fear, when they find out I’m an English professor). We teach the whole complex world depicted in literary works, in which it’s clear that the skullduggery we face in the world today is nothing new. But it’s worth knowing there is historical precedent; it’s important to have access to other minds in other times, contending with the same traumas that seem so unprecedented today. But there’s a risk in the assessment as well, and I turn in conclusion to a warning ventured by the eminent scholar George Steiner prefacing his book Language and Silence in 1970 (another moment of acute political trauma): “To think of literature, of education, of language, as if nothing very important had happened to challenge our very concept of these activities seems to me unrealistic,” he wrote with tactful restraint. “To read Aeschylus or Shakespeare—let alone to ‘teach’ them—as if the texts, as if the authority of the texts in our own lives, were immune from recent history, is subtle but corrosive illiteracy.”