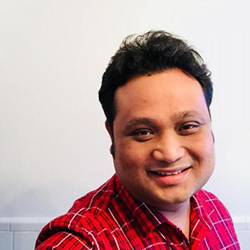 Where and when did your writing career begin?

My writing career began in Assam. I grew up in Assam, which is a state in India’s northeast. So if you have had Tetley or Lipton or Twinning’s you have had Assam tea. Anyway, that’s one way you can think about Assam. I grew up in Assam, and I actually started writing first in Assamese—and in school, I used to write for school magazines in English. But my early published works were in Assamese, and I also wrote a lot of fiction in Assamese for the public radio.

They used to have this program for new writers (new writers as in writers younger than thirty). So I was in my late teens and early twenties, and I started writing for the radio. You had to write a short story, and they would approve it, and you could go and read and record it, and they would play the recording.

And then when I moved to Delhi, I continued my writing. But primarily I would say I started as an Assamese writer who wrote both in English and in Assamese—and my writing career started in Assam.

Do you have a particular approach to teaching creative writing?

So I was trained how to teach creative writing at an American university. But during my training, I discovered that there is an over-dependence on American writers and British or Canadian writers. Forget about writers of color or not—but primarily there was an over-dependence of writers published in the West. Which is understandable because the teaching of creative writing has started here. I think that is going to change as the discipline becomes diverse.

I try to include diverse writers on my syllabi—especially writers from different parts of the world. But my goal as a writer or an editor or a teacher is just to read something and say, “here is a problem, and you need to figure out. And I can give you strategies to figure it out, but I am not able to fix it. I am going to serve as an experienced reader and put my finger on the problem areas.” Writing is collaborative. So my role is actually the role of an editor. I don’t see myself as an authority figure with the last word on the draft. I think I am an experienced reader and editor, and I will highlight areas that are of concern. But it is the duty of the writer to go and figure this out.

You are a writer, but also an editor, translator, and teacher. How do you see these roles interacting? And are you instinctively bringing these roles into the classroom?

Well, I am all of these in the same person. So definitely, I’m sure it seeps into my work and my teaching. I do translation because I feel that there is so little from Assam that has been translated to wider languages. And since I only have access to one wider language (English), I translate to English. I hope that literature written in India’s regional languages will be translated more, and more people will read it. And this is mainly because of my own interest with the widespread reception of English writing as the only cultural production or as the only way of understanding Indian reality through literature.

Indian-English writing is a new literary tradition. But writing in Assamese, Bengali, Hindi, and Urdu have existed for at least a thousand years or more. And these are really robust cultures. This is not to pit one against the other and say one is best. But I want to say that the over-dependence of the primarily Western world to understand Indian literature through literature written only in English is a problem, I think. If you want to understand literature in India, everyone should be able to access literature written in other languages.

This was one of the desires, actually, that drove me to translating. I thought that since I can translate, maybe I should translate. So it was more of a moral duty and a political choice. As an editor, I also started a literary journal with two other friends who feel passionately for the journal. It is called The Northeast Review. The journal aims to present literature written from the Northeast, but also underrepresented literature. We ran it for a couple of years, but there was no funding, and we had to go on an indefinite hiatus. And I hope one day we’ll get funding for it.

But to your first question: I feel very strongly that we need to support literary productions from India’s Northeast to create a dialogue between different literary cultures.

As an editor, also, I am editing a collection of short stories now. It’s been a while, but I’ve been editing it—I wanted to again curate this book because I just felt that these are such wonderful stories and they’re about such urgent, powerful realities that most people don’t know about. And there are a bunch of writers who are not just writing very political stuff; they are also writing very well-crafted short stories. I started translating when I was in undergrad because I just wanted to bring literature in Assamese to a wider audience. Only now, I have started looking at it more politically.

Who are some of your favorite writers? What are you reading right now?

I really go back a lot to Toni Morrison and William Faulkner. I re-read Amitav Ghosh, who I absolutely love. But I believe that I have also been shaped by Indian local literary traditions. I grew up reading Assamese writer Indira Goswami, and she has had a huge impact on me personally and also as a writer.

I also return to Bengali writer called Ashapoorna Devi’s fiction. She has written thousands of short stories and over 150 novels. I like to say that Indira Goswami, Ashapoorna Devi, Amitav Ghosh, and Toni Morrison were my first creative writing teachers. Whenever I’m in doubt, whenever I’m stuck, I open the pages of any of these writers, Indira Goswami especially because her writing was extremely imagistic. Her lush prose used beautiful similes and images drawn from nature. Ashapoorna Devi primarily because of storytelling and characterization. She’s the kind of writer who you would read just one paragraph of and know the character. She had such power. Amitav Ghosh also because he once said that he writes Bengali novels that are written in English, and when I read that I thought, “Yes, even I write Assamese novels that are written in English.”

Toni Morrison I read as an undergraduate student. I was completely blown away by the way she combines politics and aesthetics and writes subversive fiction.

Can you tell us about any projects that you are currently working on?

I have also put together a collection of poems tentatively titled An Invitation to Murder. In 1979, the Northeast Indian state of Assam erupted into an armed insurgency, demanding to secede. Like numerous other lesser-known insurgencies in the world, this conflict between the Indian state and the insurgents and the stories of people who suffered went largely unreported. During this period (1979 to the present), more than thirty thousand people were killed on both sides, hundreds injured, handicapped, and killed extra-judicially by the Indian army to brutally crush the rebellion. These poems take a look at this violent period and reflect on the consequences of prolonged violence on people. If someone accepts it for publication, this would be my first poetry collection!

And I am also revising an Assamese novel I wrote serially. So I wrote this novel in an episodic form for a magazine over two years, and it was published in this journal every month. That novel is now getting published in Assamese. I’m giving finishing touches to it and trying to send it to my publisher.

The novel roughly translates as “The River is Now Far Away,” and it is set in the U.S., actually. It’s about an immigrant student called Rajeev, and it’s about his experience as a student and what it means to be a brown person in the United States—because he discovers brownness for the first time. These are issues that are not at all explored in Assamese literature. There have been some novels set in the U.S. written by Assamese language writers, but the eye was mostly of surprise and admiration because most of these writers came here to visit—so they were touristy and their representation was like a tourist. But I thought that I had to write this novel because it is so important to bring this conversation also to other spaces, not just in English literature or American literature. And I felt that when I came here when I was twenty-six or twenty-seven, I was much more cynical. The moment I stepped here, I felt all of these identities clamoring to find a space in me. It was really important for me to negotiate that and also start this conversation in the realm of Assamese literature. It casts a critical eye on Obama’s America in many ways.

How are you finding Athens so far?

Oh, well I think the campus is really lovely and soaked in history. I’m still learning about the history of UGA and the city—and obviously the history is in many ways disconcerting, but it is exciting to know that so much has happened in this place.

I like Athens. It is a small town and manageable; it’s not chaotic. I’m liking it. I’ll be able to explore more when I learn how to drive: I’ve not learned how to drive yet.

In India we’re so dependent on public transport, which is not the best but it’s there. Anywhere you need to go you can take public transport—you don’t need your own car. But anyway, I’m learning how to drive and giving myself this semester to become an expert driver. And I’ll explore some more places after that.

What is one thing any student enrolling in your class should know about you?

Oh, that I’m going to make them work very hard. That I want them to read widely and come and tell me what to read. I want a good reader in my class before anything else. Because classes are about books. If you don’t have a habit of reading, then you won’t be very happy in my class.

I want them to be a good reader and to read widely—or at least be ready to read widely. Because most of the time when I give feedback I say “here, read Marquez and then you can write your opening lines better, or read Morrison and your images will become better.” That’s usually what I say when reading a short story.