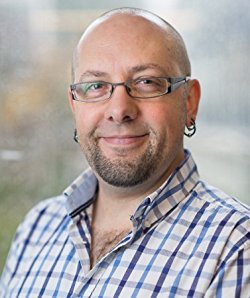 American Indian Returnings (AIR) celebrated its third year at the University of Georgia English Department and Creative Writing Program. This year’s AIR scholar and author Daniel Heath Justice spoke on “Cartographic Kinscapes: Hometakings, Homecomings, and Reading the Ruptures of Indigenous Dispossession.” Justice, an enrolled citizen of the Cherokee Nation, lectured to a 130-member audience and spoke afterwards with undergraduates, graduate students, and faculty.

The American Indian Returnings series began in 2015 with the goal of celebrating Native American scholars and authors and their “return” from exile to the Southeast.  During Justice’s lecture, he spoke about the devastating impact the Dawes General Allotment Act of 1887 had on American Indian tribes, using his own family’s history as an example.

“Daniel is one of a handful of Native literature scholars that also writes fiction, creative non-fiction, and plays,” said co-sponsor of AIR talks, Professor LeAnne Howe, Eidson Distinguished Professor in American Literature.  “His lecture was particularly insightful on how federal Indian policy affected individual tribal families, then as now, some 130 years later.”

Professor Justice holds a research chair in First Nations and Indigenous Studies at the Institute for Critical Indigenous Studies, with a cross-appointment in English at the University of British Columbia.  He is author of Our Fire Survives the Storm: A Cherokee Literary History and numerous essays in the field of indigenous literary studies, as well as co-editor of a number of critical and creative anthologies and journals, including the award-winning The Oxford Handbook of Indigenous American Literature (with James H. Cox) and Sovereign Erotics: A Collection of Two-Spirit Literature (with Qwo-Li Driskill, Deborah Miranda, and Lisa Tatonetti).

Next year’s AIR lecturer is Professor Chadwick Allen, a scholar in Native American and global Indigenous studies, and Associate Vice Provost for faculty development at the University of Washington in Seattle.