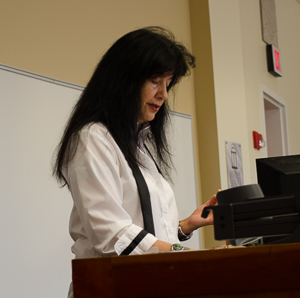 Each year on the autumnal equinox, LeAnne Howe, Eidson Distinguished Professor in American Literature, and the Creative Writing program sponsor the American Indian Returnings (AIR) lecture series. These talks focus on Southeastern Native epistemologies in the fields of the humanities, science, art and technology, spirituality, and indigenous philosophies of these tribes who regard the Southeast as their original homelands. AIR lecturers tackle, among other issues, the art of rediscovering balance through the inclusion of Southeastern Indian histories, cultures, and art. This year was no different.

AIR presented Joy Harjo, a citizen of the Mvskoke Nation, to a standing room only crowd at the Zell B. Miller Learning Center on September 22, 2016.

Ms. Harjo is the author of eight books of poetry, including her most recent work, Conflict Resolution for Holy Beings, which was shortlisted for the Griffin Prize and named by the American Library Association as a Notable Book of the Year. Her memoir, Crazy Brave, was awarded the 2013 PEN USA Literary Award in Creative Non Fiction. She has written two award-winning children’s books, a collaboration with photographer/astronomer Stephen Strom, an anthology of North American Native women’s writing, several screenplays, and two plays. She was recently awarded one of the country’s most prestigious awards for poetry, the 2015 Academy of American Poets Wallace Stevens Award, for her achievements.

Ed Pavlić, Distinguished Research Professor and Director of the Creative Writing Program at the University of Georgia said this about Harjo’s visit: “When Joy Harjo comes to town, people should be sure to take advantage of the opportunity to be within the radius of her sound when she reads her work, maybe plays a little music, maybe sings her inimitable verses woven from the most basic threads of American experience. Like soul singer Frankie Beverly sings, of another kind of joy, maybe, and some pain, it’s like ‘sunshine and rain.’” 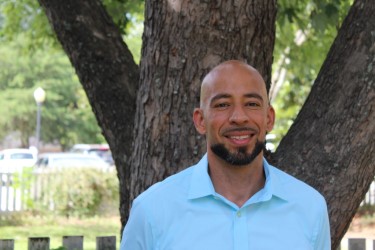 As of Fall 2016, Eric Morales-Franceschini joins Park Hall as an Assistant Professor of English and Latin American and Caribbean Studies. Eric comes to UGA by way of UC, Berkeley, where he earned his PhD in Rhetoric (with a designated emphasis in Critical Theory) and wrote his dissertation, “Mambí Totems and Reconcentrado Taboos: Violence and the Unjust Dead in Cuban Literary and Visual Cultures,” under co-chairs Judith Butler and Trinh Minh-ha. A James B. Duke Fellow at Duke University and Chancellor’s Fellow at UC, Berkeley, Eric has also received fellowships from the Woodrow Wilson and Ford Foundations.

Morales-Franceschini, a multidisciplinary scholar, specializes in postcolonial and poststructuralist theory, liberation philosophy, and critical Caribbean and Latinx studies. His scholarly articles on Afro-Caribbean figurations of the abject, poetic witness to atrocity in the War of 1898, and the machete as political metonym in Cuban historical cinema are under review at Anthurium, Social Text, and Camera Obscura, respectively. Other scholarly works in progress include essays on vernacular and militant performativity in the Puerto Rican Young Lords as well as the motifs of spiritual resilience and solidarity economics in Ernesto Quiñonez’s novels. His book manuscript, ¡Al machete!: mambí aesthetics and liberatory ethics in the Cuban imaginary, explores what revolutionary virtues the mambí, the beloved nineteenth-century guerrilla soldier, has come to convey as well as foreclose in Cuban oratory, historiography, cinema, monuments, and museums. 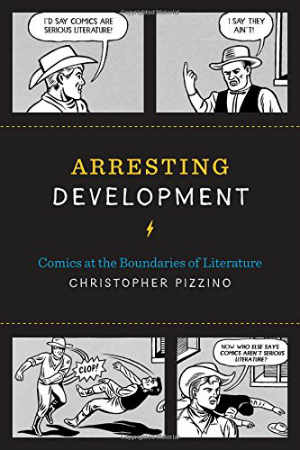 Earlier this fall, Christopher Pizzino’s new book Arresting Development: Comics at the Boundaries of Literature was published by the University of Texas Press. Arresting Development explores how and why comics have long been considered a lesser form of art and literature in the United States. In his opening chapter, Pizzino surveys the long, sad history of comics’ marginalization. Later chapters celebrate the way comics creators themselves have resisted their low status, especially through the complex, subversive images they draw on the pages of their work. Around the time of the book’s release, UTP hosted this blog post by Pizzino. In it, he tells some stories from his own teaching and scholarship—including the time someone suggested he should be fired for teaching comics!—and explains what drove him to write Arresting Development.

The professional conference presented the work of 160 scholars; the schedule included a digital humanities workshop and a display of first and rare editions of eighteenth- and nineteenth-century books. In conjunction with the conference, Holly Gallagher and Maria Chappell curated an exhibition at the Hargrett Rare Book and Manuscript Gallery, “From Page to Stage: Women and Drama in the Eighteenth and Nineteenth Centuries,” including rare books, letters, cartes de visit, broadsides, and other documents from the UGA archives. Graduate students Renee Buesking, Danielle Gilman, Lainie Pomerleau, Alexie McPherson, Sarah Mayo, Jessica Roberts, Maria Chappell, and Anna Forrester were also involved in planning and preparing for the conference.