Valerie Babb retired from the University of Georgia’s English Department at the end of the Fall 2017 semester. Dr. Babb was the Franklin Professor of English and Director of the Institute for African American Studies at the University of Georgia before retiring and taking a position at Emory University as the Andrew Mellon Professor of Humanities in the Departments of English and African American Studies.

Cynthia Turner Camp was an SEC Visiting Scholar at the University of Missouri for a week in early March. While she was there, she discussed a publication in process with graduate students in a religion course, led a workshop on Books of Hours at the Special Collections Library, and presented research in progress in the English department's Friday Speaker Series. She is now Graduate Coordinator for the department, and (with Casie LeGette) organized the first annual symposium on finding non-academic jobs with an English graduate degree. If you are a graduate alum and want to present at this symposium in future years, we'd love to bring you back. Just drop Dr. Camp an email (ctcamp@uga.edu).

Christy Desmet is one of ten faculty members recognized as a 2018 Outstanding Professor by the Student Government Association (SGA). Honorees are chosen from student nominations, and Dr. D. was nominated by Robby Nadler.

Lindsey Harding was admitted to the 2018 cohort of CTL's Faculty for Innovative Teaching program to develop, curate, and pilot Open Educational Resources for writing-intensive courses. In collaboration with Elizabeth Davis and Sara Steger, Lindsey again received a grant from the Parents Leadership Council to host a second writing retreat for undergraduate students at UGA in Fall 2018. Lindsey co-authored an article titled "The Five Minute Teach: Instructional design to support TA training and writing instruction in the sciences” with A. Kelly Lane, a graduating PhD student in genetics. The article is forthcoming from the Journal of College Science Teaching. Lindsey’s short fiction “A Brief History of Baby Pictures” appeared online in apt in March 2018, and her piece “Pillows Apart” will appear in the tenth issue of Spry Literary Journal.

Eidson Distinguished Professor in American Literature LeAnne Howe presented on a panel at the 2018 Association of Writers & Writing Programs (AWP) conference in Tampa, Florida.  The panel, “Erasures, White Shame: We Need to Talk,” was moderated by Natalia Treviño and also featured Ching-In Chen, Wendy Barker, and Rita Dove.  The panelists shared their experiences with erasure or being silenced, and how they have confronted the idea of “white guilt” in the classroom, among other topics.  Kore Press included the text of the panel discussion in its newsletter, available here. Additionally, the first book-length study of Professor Howe's work is out from LSU Press. Written by Kristin Squint, LeAnne Howe at the intersection of Southern and Native American Literature, covers much of Howe's literary production. 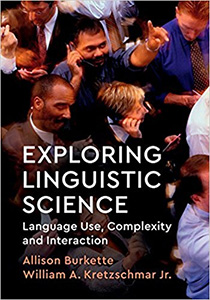 Bill Kretzschmar, along with Allison Burkette (UGA Linguistics PhD, 2001), has published a new textbook with Cambridge University Press, called Exploring Linguistic Science (2018). This book integrates ideas about complex systems with an introduction to the terms and concepts of the field of linguistics. The book thus offers the first accessible introduction to complexity science for students in the humanities. The idea that human speech is a complex system emerged from Kretzschmar's work on the Linguistic Atlas Project, which has done survey research on thousands of American English speakers and so has provided the Big Data needed to observe the operation of the complex system.

This year, Casie LeGette was promoted to Associate Professor with Tenure. Following the publication of her book, Remaking Romanticism: The Radical Politics of the Excerpt early in 2017, she published two articles that reflect new directions for her research: “Cooperative Quotation: George Eliot and George Jacob Holyoake” in Victorian Studies and “Cutting Lyric Down to Size: Victorian Anthologies and the Excerpt as Poem” in Genre: Forms of Discourse and Culture. Dr. LeGette has also been investigating questions of lyric poetry and anthologies in her recent classes, most extensively in a course dedicated to Nineteenth-century Poetry, Anthologized.

Tricia Lootens, Josiah Meigs Distinguished Professor of English, was promoted to Full Professor. Dr. Lootens published Political Poetess: Victorian Femininity, Race, and the Legacy of Separate Spheres, with Princeton University Press in 2017 and is co-editor, with Paula Krebs, of Rudyard Kipling’s Kim (Longman, 2011). She is also the author of Lost Saints: Silence, Gender, and Victorian Literary Canonization (University Press of Virginia, 1996). In Spring 2019, she hopes to be teaching UGA English students in Cortona, Italy. The Cortona Program was featured in last semester’s newsletter. For more information, visit their website.

John Lowe has had two edited books accepted for publication: Summoning Our Saints: The Poetry and Prose of Brenda Marie Osbey (Lexington Books) and Approaches to Teaching Gaines’s The Autobiography of Miss Jane Pittman and Other Works with Herman Beavers (Modern Language Association). He delivered the keynote address, “The Sinister and the Sublime: The Swamp in CircumCaribbean Culture,” at the Deep South in the Global South Conference at the University of Louisiana, Lafayette and gave an invited lecture at Penn on “The Southscapes of Ernest Gaines” in March of this year. He also presented several other papers at conferences, including two papers for the Society for the Study of Southern Literature (February 2018, UT Austin): “Troubling the Empire of Cotton: The Gastonia Textile Strike, Erskine Caldwell, and God’s Little Acre” (Society for the Study of Southern Literature) and “Dark Waters: Vereen Bell’s Swamp Water and the Tropical Sublime.” Dr. Lowe's book Calypso Magnolia: The Crosscurrents of Caribbean and Southern Literature from UNC Press has won the organization's 2017 C. Hugh Holman Award. Judges commented on the book's "sweeping reassessment of both well and almost-never-read works,” and in particular its groundbreaking approach to the “difficult-to-situate state of Florida.” The award is named for C. Hugh Holman, who taught southern literature at the University of North Carolina at Chapel Hill for three decades and helped to establish the National Humanities Center. The annual award is for the best book of literary scholarship or literary criticism in the field of southern literature during a given calendar year. The 2017 award recognizes a book produced in 2016 and will be presented to Dr. Lowe this January at the Modern Language Association Conference in Chicago.

Barbara McCaskill completed two essays on the fugitive slaves and transatlantic abolitionists William and Ellen Craft. A chapter on Ellen Craft’s photograph album is forthcoming in African American Literature in Transition, 1850-65, edited by Teresa C. Zackodnik (Cambridge UP). A chapter on the 1861 edition of the Crafts’ Running a Thousand Miles for Freedom has been accepted by Kathleen Diffley and Benjamin Fagan for Picturing Eloquence: The Civil War in Word and Image (UGA Press). She presented an invited talk on memoirs by the Crafts and Rev. Peter Thomas Stanford at Emory University’s James Weldon Johnson Institute for the Study of Race and Difference and was interviewed about the Crafts for April’s UGA Press blog.

Eric Morales-Franceschini, Assistant Professor of English and Latin American Studies, has been awarded the 2018 Ford Foundation Postdoctoral Fellowship. He will be a Visiting Scholar at Duke University for the academic year 2018-2019. He was also given the English Department’s Martha Bunn Bedingfield Excellence in Teach Award at this year’s Honor’s Day celebration. 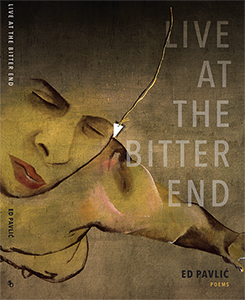 Ed Pavlić's newest collection of poems, his seventh, was published by Saturnalia Books in March 2018. Titled Live at the Bitter End, the volume takes the form of a murder trial to investigate the racially hybrid origins of modern artistic practices.

Channette Romero's essay “Performing Cherokee Masculinity in The Doe Boy” is forthcoming in Race and Cultural Practice in Popular Culture (Rutgers UP, 2018). A second essay “The Potential (and Pitfalls) of Activist Filmmaking: Indigenous Women’s Activism in The Spirit of Annie Mae” is forthcoming in Visualities: Perspectives on Contemporary American Indian Film and Art, Volume II (Michigan State UP, 2019).

Esra Mirze Santesso received UGA’s Office of International Education’s International Diversity Award, given each year to a faculty member who has shown dedication to promoting diversity at the university. As a literary scholar in the field of postcolonial studies, with a focus on religious minorities living in the West, Dr. Santesso is attentive to current debates about migration. All of her courses complement the university’s mission to internationalize its curriculum by adopting a broad geographical focus that includes South Asia, Africa, the Caribbean, and the Middle East. Muslim identity, multiculturalism, and racial diversity are important parts of Dr. Santesso’s scholarly work as well; her monograph, Disorientation: Muslim Identity in Contemporary Anglophone Literature (Palgrave, 2013) and her co-edited collection, Islam and Postcolonial Discourse (Routledge, 2017) examine Muslim subjectivity to underscore Islam’s increasing importance in postcolonial societies. Last fall, she was invited to participate in a round-table discussion of “UGA’s Muslim Community” organized by the Georgia Debate Union.

Andrew Zawacki's new full-length poetry volume, UNSUN: f/11, is forthcoming next year from Coach House Books. This year, he was awarded the prestigious Albert Christ-Janer Creative Medal by the University of Georgia Research Foundation and UGA’s Office of Research.

At the annual 4C (Conference on College Composition and Communication) meeting, Robby Nadler, Kristen Miller (Head of the Division of Biology), and Christy Desmet received the Council on Basic Writing's Award for Innovation for UGA's Science Writing Project. Only one award is given each year nationally. A collaboration between the UGA Writing Center, Division of Biology, First-year Composition, and the Writing Intensive Program, the Project involved a study of how advanced humanities writers respond to biology lab reports to isolate science writing knowledge gaps. The study resulted in enhanced training for our Writing Center consultants and a science writing handbook for Biology 1107L, authored by Robby as Assistant Director of the Writing Center. This semester, he also piloted the university’s first FYC class on science writing.

With Professor Barbara McCaskill, graduate student Sidonia Serafini is compiling an edition of the life and works of transatlantic preacher, writer, and anti-lynching activist, Rev. Peter Thomas Stanford (c. 1860-1909). The edition is forthcoming with UGA Press. With the Director of the Hargrett Rare Book & Manuscript Library, Ms. Katherine Stein, Sidonia is co-curating the 2019 Exhibit on the Georgia Convict Lease System.